Shekhawati is not the name of a particular city or town. In fact, it is the name of an entire region in northern Rajasthan, which was once controlled by the (King) Rao Shekhaji.Mokals only son Shekha was born in 1433 consequent to the blessings of muslim saint Sheikh Burhan, hence the name Shekha was given & that formed the Shekhawat clan .The region comprises of small towns and villages in the districts of Sikar and Jhunjhunu,with natural boundaries of the Aravalis to the east and desert sands in the west. The story of the formation of Shekhawati and the rise of the Shekhawat has a legendary flavor. 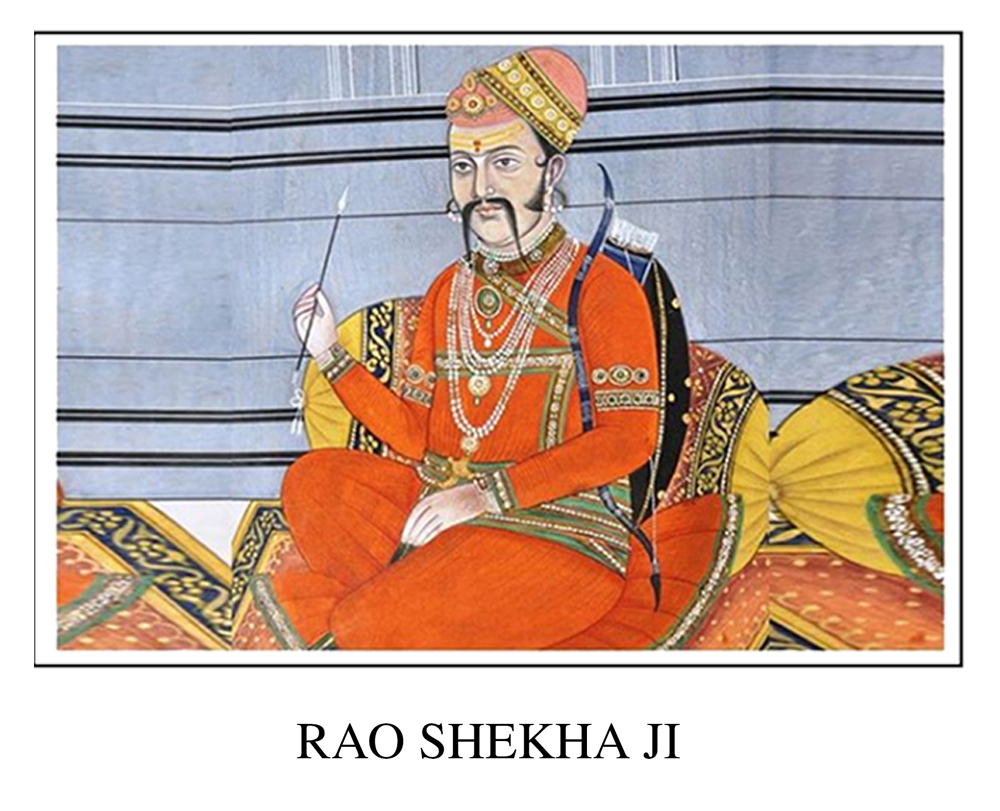 Starting from 1445, when Shekha came to the throne of Barwada, he was only twelve years old and ruled over twenty-four villages. Soon after his accession, Shekha befriended a group of Panni Pathans, who were passing through his lands and ordered them a group of twelve villages live in.
This alliance proved to be very valuable, as the Pathans were responsible for his meteoric rise and victory over the Amber forces. Chandrasen, then the ruler of Amber, made two more attempts to defeat Shekha, but had to retreat both times. This resulted in a treaty with Shekha, which granted him independent rule over his territories, including those territories that he had captured in he campaigns against Amber. As Shekha grew from strength to strength,The ruler of Amber(Jaipur) adorned him with the title of MAHARAO .He fought six battles with Rao Chandrasen Of Amber for the separate state of Amarsar. After sixth battle Chandrasen declared Shekhawati as a separate state from Jaipur. He made Amarsar as the capital Of Shekhawat Rajputs , where he built a fort named Shikar-garh Maharao Shekha started the sub-clan Of Kachwaha’s called SHEKHAWATS who were considered themselves bravest generals of Kachwaha Raj. Rao Shekha won 52 battles in his lifetime. Rao Shekhaji died in 1488 at Ralawta of wounds inflicted while fighting the Gaurs 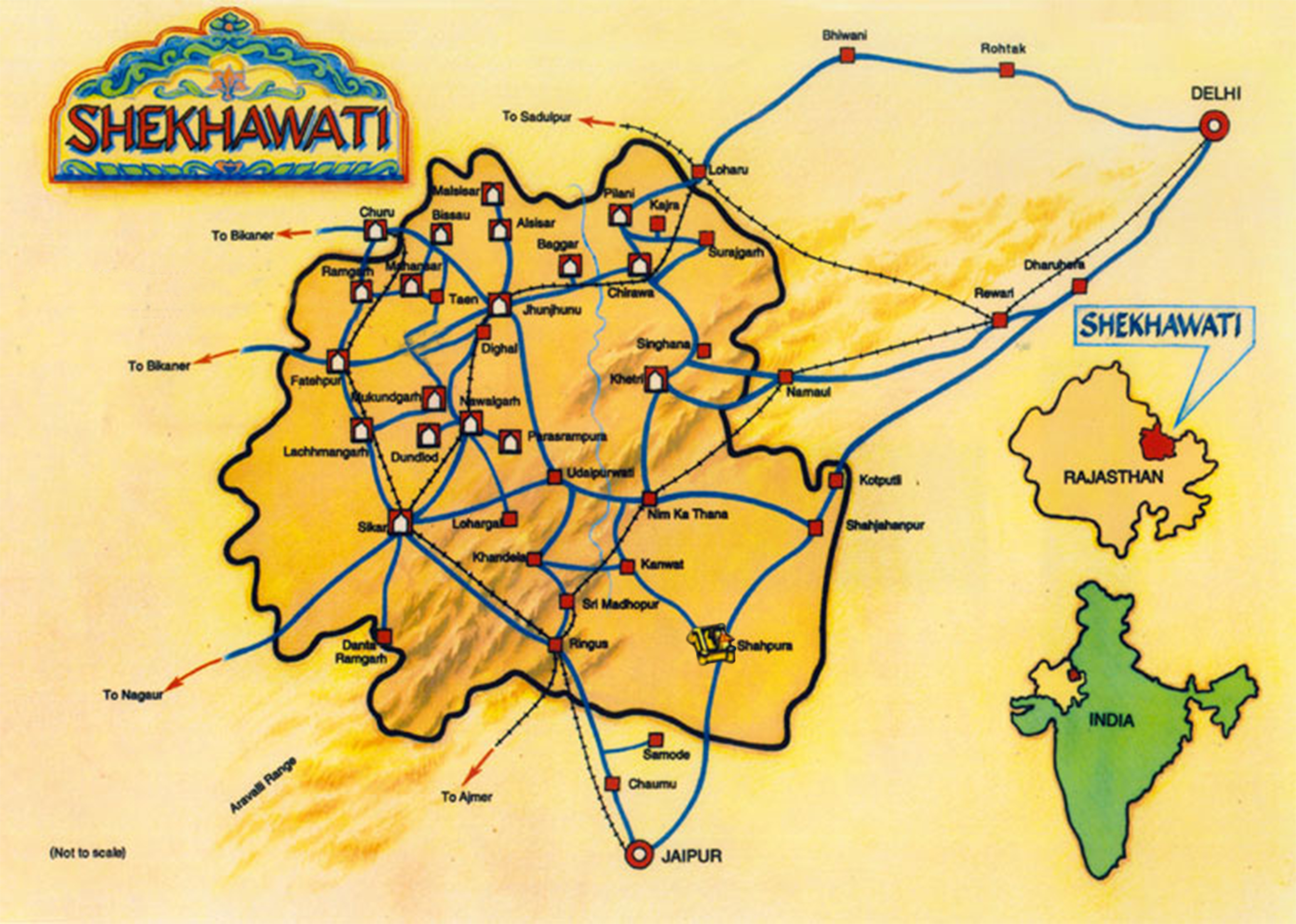 After him Rao Raimal, Rao Suja & Rao Lunkaran became the rulers of Amarsar. Rao Manohar succeeded his father Rao Lunkaran & founded Manoharpur which later known as Shahpura. Rao Shekha, a Shekhawat Rajput, was the founder of Shekhawati who divided Shekhawati into 33 Thikana (Paragnas) Shekhawats ruled over the largest number of Thikanas in Jaipur Riyasat. SHAHPURA Thikana, the head seat of Shekhawat clan. Shahpura was the tazimi thikana of Shekhawat sub-clan & was granted by Maharao Shekha to his youngest son Rao Lunkaran 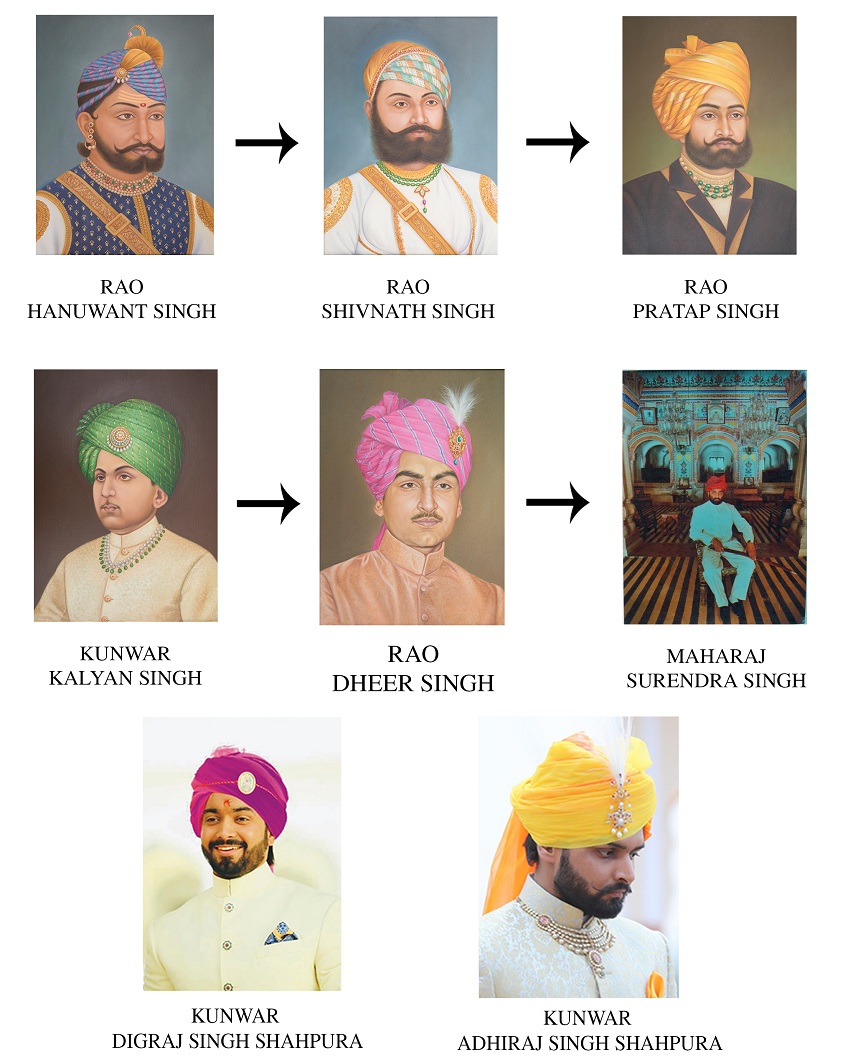 After Rao Manohar Singh ji, it was Rao Hanuwant singh, Rao of Shahpura who gave Shahpura a face lift, he made the Bagh in Shahpura, which is called Hanuwant niwas Bagh. After Him His Son Rao Shivath Singh Succeeded, Due to the problems of not having an issue, Rao Shivnath Singh Adopted a son from Garh Taknet and Named him Rao Pratap Singh and since then Garh have been like family to Shahpura Royal Family. Rao Pratap Singh was one of the rulers in Shahpura, who had done massive constructions and was one of the long lived King in the history of Shahpura. He build a palace called Moti Mahal, which is in the Boundaries of Fort and also constructed many temples. Rao Pratap Singh also Preached Islam and that is why there is a Masjid called Moti Masjid in the Palace Boundaries. After him His Grandson rao Dheer Singh joined Politics and became minister from the Congress Party. He was the Educational Minister in his regime. Rao Dheer Singh ji died at an early age, when his sons and daughter were very small. His younger Son Maharaj Surendra Singh after completing his studies, when he came back saw that things were not in place. All the palaces and Havelis needed work, he then decided to Start working from their Haveli in Jaipur, which is called Shahpura House. Since then he has not look back and he and his wife Rani Ratna Kumari have been the main pillars. They have restored their palace in Shahpura and haveli in Jaipur and have converted them in Luxury Heritage Hotels. The Hotels have been also awarded as Luxury Heritage Hotels in the year 2018 and have been included in Historic Hotels of the World. His Wife joined Politics and contested election from Viratnagar and has been active till date. She also Started a foundation called Rani Ratna Kumari Foundation which has been dedicated in Uplifiting women of Shahpura and the NGO has done many projects like renovation of there Family temples all around Shahpura including Moti Masjid. Their Sons Kunwar Digraj Singh and Kunwar Adhiraj Singh have been active in Family Business and have taken the legacy forward by acquiring more Palaces and Haveli’s and converting them into successful running Heritage Hotels.